Freedom Rangers in the Land of Dragons 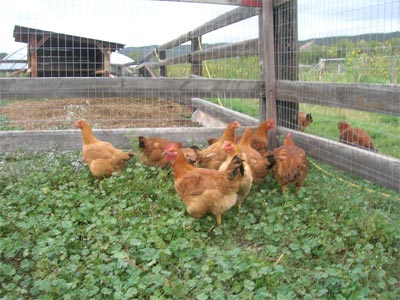 Rock Bottom Ranch is featured in the fall issue of Edible Aspen Magazine! The article (composed by RBR educator and ranch hand extraordinaire Hannah Lippe) features the FREEDOM RANGERS.  No, they are not the stars of an action TV series.  They are a breed of free-ranging chickens whom we have been raising for meat (with the ancillary benefit of soil-fertilizer from their droppings.)  In a bold cooperative endeavor with Jock Jacober of Crystal River Meats, Rock Bottom Ranch will raise a total of 1,000 meat chickens in 2011.  (And we have all already raised and had processed over 500 of them.)   If you have visited the ranch since May, you probably recall the free-ranging chickens in the pasture, with their dome-shaped mobile pens (chicken tractors).  An electric fence protects the chickens from bears, and their grain reserves from the ravenous jaws of Big Willy.  As their name suggests, the freedom rangers spend their days roaming the pasture, pawing and pecking the earth in pursuit of bugs and worms and plants to eat.  Considering their small size, I consider the birds to be remarkable eaters; they dive into grain at morning and evening feedings, and spend the rest of their days finding wild food.  They break to drink water, rest, or enjoy a dust bath.  Or they may interrupt their quest to fight another chicken. Fights are a natural part of life for chickens.  Roosters face off with other roosters for dominance, while hens tussle with other hens.  They stand face-to-face, cluck, and fluff their feathers threateningly.  If neither opponent backs down, they peck each other.  Roosters kick with their spurs.  Most fights ends when one combatant flees; serious injuries occur only rarely.  And on the free range, there is ample space for the loser to escape. Although they are natural explorers, chickens prefer to explore close to home.  Once a chicken has found a safe zone (such as a chicken tractor), she will return night after night.  Our egg-laying hens (at the other end of the ranch) rome with fence-gates open during the day, but don’t venture too far from their home coop.  Perhaps chickens perceive the world similarly to early maritime explorers—beyond the edge of the map, there is mystery and danger.  “Here there be dragons.” Recently, we brought some of the freedom rangers beyond the edge of the map.  And there were dragons there. The survival rate of our meat birds has been so high that we had a surplus of freedom rangers from our last crop.  More birds grew to market size than we had arranged to be slaughtered.  And so, these extra birds inhabit the ranch now.  (And you can take one home for $10!)  On Friday, Amy recruited my assistance to move these birds in with the egg-laying hens.  The plan: move them in the afternoon to a separate ‘room’ of the layer’s chicken coop.  Let them stay overnight.  In the morning, let them out to mingle with their new neighbors. We placed the chickens in crates for transport across the ranch.  They fluttered and squawked when we caught them by their legs, but calmed down quickly inside the crate.  Boxed in with their fellow chickens, they took a crowded truck-ride across the ranch.  Then we introduced them to their new home. In the early morning, the opened the chickens door.  In the late morning, I returned to check on them—only to find that the “freedom rangers” were still huddled in their room, and hadn’t dared to venture into the yard.  Evidently, they needed some persuasion.  I lifted some by the feet, and pushed them through the door; others I chased out.  Once on pasture, the freedom rangers again began to act out their namesake. But they stayed huddled together, safe from this foreign flock of chickens, who now shared the pasture.  Inevitably, as both parties pursued food and water, the egg-layers and the freedom rangers started to intermingle.  A bit of grain that I put on the ground encouraged this process.  A few freedom rangers came to eat—uncomfortably beside the strange other chickens, who came in so many different colors.  And then, the dragons arrived.  The six young turkeys who joined the ranch this year, also came to the grain to eat.  With their larger size, long necks, and menacing beaks, they must have resembled dragons to our freedom rangers.  And, like dragons, they did not take kindly to intruders on their territory.  A turkey pecked at a freedom ranger, chased her, tried to jump upon her.  The ranger ran off and escaped.  And returned to peck at the grain.  And the process repeated.  The ranger escaped again, but could not resist the lure of grain….  The laying-hens pasture has become an avian jungle, with chickens of all breeds and ages, the young turkeys, the elder turkey King Louie, and Eve the peacock.  The animals learn to coexist, by cooperation or mutual avoidance.  I am sure that the freedom rangers will follow suit, and find their place in the “pecking order.”  In the meantime, they  must rely on their wits and speed, to survive in the land of dragons. Epilogue: After composing this post, I revisited the birds, and found freedom rangers and turkeys sharing the pasture, at a safe distance from each other.  Evidently, both have adapted to the new neighbors. 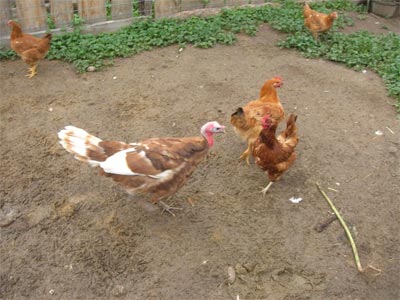 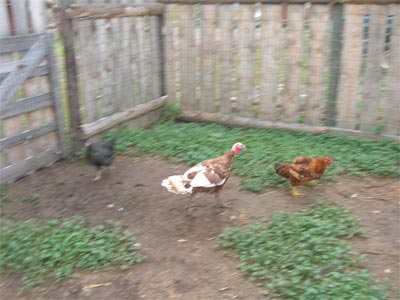