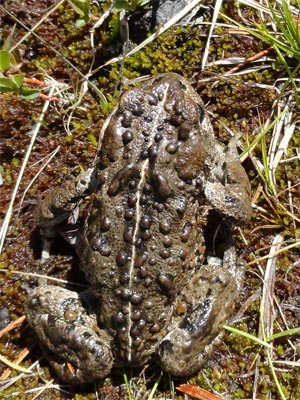 A few weeks ago Howie, Kevin and I climbed Ashcroft Mountain. The hike was beautiful, the views were great and my peanut butter and banana sandwich at the summit was delicious. There were tons of awesome finds along the way, what may have been a bears den, some spectacular lodgepole pines, Howie narrowly avoiding an old tree crashing into his head and then later almost stepping on an elk calf and even some big cat tracks. But on the ascent down I made a find that trumps all the others. I know… at this point you are thinking that this day most certainly cannot get much better. I was thinking the exact same thing as we made our final steep ascent down to Express Creek Road. But, with a final leap down to the dusty rock covered road I noticed something out of the corner of my eye. A small trickle of water was slowly flowing out of the side of the mountain and there bathing in a cool puddle just in front of my boot was a toad! I absolutely love toads. They may be my favorite animal. They’re so rough and tough with there warty skin and distinctive stocky build. I was ecstatic to say the least, but not just because I like the little guys so much. This was no ordinary Eastern American Toad found throughout the eastern United States. This was a boreal toad (Bufo boreas boreas). Boreal toads are Colorado’s only alpine species of toad living at elevations between 7,500 and 12,000 feet. Their habitats are restricted to areas where mating is possible in spruce/fFir forests where they can utilize calm sun exposed water. Unlike many other frogs and toads, the boreal toads mating call is a soft chirp rather than the deep loud call of many of his relatives. Unfortunately the boreal toad is an endangered species in Colorado due to a chytrid fungus Batrachochytrium dendrobatidis (Bd). The Colorado Division of Wildlife is currently studying these guys to see if they can come up with a solution to this epidemic. More information about the Boreal Toad Conservation Plan which was completed in 2001 can be found on the CDOW website. If you do happen to sight a boreal toad in the wild contact your local CDOW officer with its location. We were sure to let them know where we found this little guy. Hopefully we will be able to solve this problem so that these wonderful creates will be around for everyone to enjoy as much as I did.