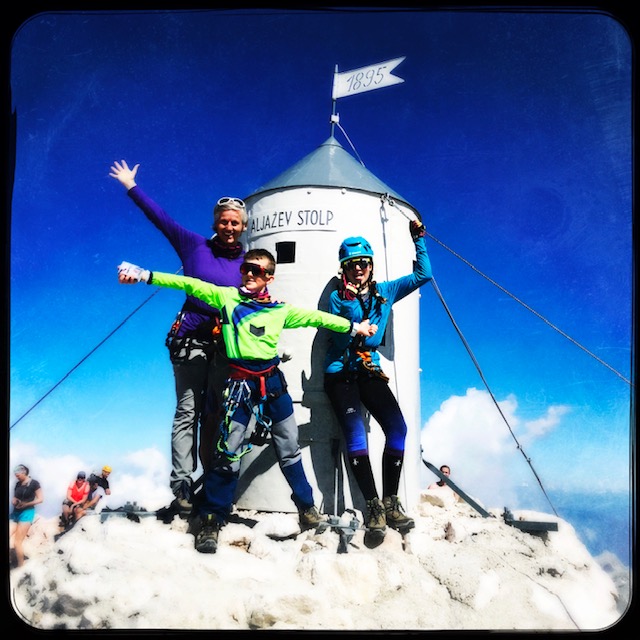 Due to heightened concern over COVID-19, we have decided to cancel tonight’s talk. We look forward to seeing you next season!

“It’s Not Always Sunny on the Sunny Side of the Alps: Our Year-long Adventure in Slovenia”
Anda, Zala, and Luka Smalls

These are just some of the places that Conde Nást or National Geographic declared as the hidden jewels of Europe back in the 2000s… but really, how undiscovered is sLOVEnia anymore?

Anda was born in Maribor, Slovenia back when the southern side of the Alps was truly undiscovered (it was still Yugoslavia then). “The Sunny Side of the Alps,” as the young country’s promotional slogan proudly announced in the 1990s, was a marketing tool to differentiate Slovenia from the rest of the former republics of Yugoslavia. But climbing and adventuring in the beautiful Slovenia is one thing. As the Smalls family learned while living there last year, living there and just trying to fit in is another. There are plenty of rainy days, even on the “Sunny Side of the Alps!”

Anda grew up as a ski racer on Pohorje where they hold the Zlata Lisica (Golden Fox) Women’s World Cup ski race every year. Ski racing took Anda around the world and eventually landed her in the United States at CU Boulder. But it was 24 Hours of Aspen that brought her to the Roaring Fork Valley, where she found her other home away from home. Married to an Aspen native and two kids later, Anda kept saying: “One day, we will live in Slovenia for a year!” Her kids, Zala and Luka, always knew that “one day” that year would come.

Visits to Slovenia were an annual occurrence for the Smalls family. Being half locals and half tourists for the month-or-so-each-year, Zala and Luka were always eager to land in the old country and spend time with Anda’s family, participating in regular daily life including short stints in day-care and elementary school. Zala and Luka were always the cool, half-Americans that spoke great Slovene (real Štajerska accent to boot!) and fit right in. A year living there should be a breeze, right?

The “one day” saying came to fruition in August 2018. Freshly off crutches for Luka, packed with 4 bags and one bike box, they said goodbye to their family on this side of the world and left to go say hello to their family on the other side of the world. Zala, Luka and Anda planned to be in Slovenia for the full school year, with husband Ryan coming to visit as his work and life schedule allowed. It was GO time!

Come hear the stories from Zala, Luka and Anda as they relive their year in Slovenia, sharing their own versions of what it feels like to be an outsider with an insider’s view. Zala and Luka braved the seemingly easy every-day schedules, only to discover that just speaking the language does not tell the whole story. Anda thought she was going to be just fine, she grew up there, right? But then again, she never was an adult having to deal with paperwork and banks and insurance and phone companies and doctors and… sometimes feeling just as lost as her half-American, half-Slovene kids.