A Temporary Disturbance at Hallam Lake: What About The Beavers?

This year, as ACES prepared to take on a generational-scale project at Hallam Lake, succinctly called “Hallam Lake Embankment and Habitat Improvement Project” (HLE & HIP – whew!) a lot of questions came up about the fate of the wildlife that relies on the lake. This project meant Hallam Lake would be drained and big yellow machines (excavators and loaders) would be busy for a few months digging, forming, and creating a lake and wetland habitat that will serve wildlife and our community well into the 2070s.

But, right now? What will happen to the wildlife?

Some fish were netted and brought to safe havens, some went down towards the Roaring Fork River, and some did not make it through the initial disturbance. The birds that nest and rely on Hallam Lake in summer for fish and aquatic invertebrates made the annual trip to winter territory. We hope they like what they see when they return in May. Deer, bear, pine marten, and coyotes continue to use the area as if nothing is happening.

The biggest question and concern on everyone’s mind has been “What about the beavers?” There has been a well-known, active beaver lodge on Hallam Lake for over 40 years — and for the past several thousand years the area has likely been inhabited by beavers almost continuously. This project is disruptive to the beavers, as they rely on a constant lake level that allows them underwater access to their bank lodge, which is located under spruce trees on the west side of the lake. A deeper pool in the lake ensured a great food cache for winter.

See the interactive map below to see all the points we reference in this article:

What is a Beaver Cache?

A beaver food cache is a whorl of mostly willow and cottonwood stems and branches that the beaver cuts and stores as a reliable food source for the winter. Beavers can access the cache from their lodge by swimming underwater and never getting on land. Beavers are always vulnerable to predators on land. In winter they are even more at risk. Snow slows down their  travel and the lack of leaves on trees and shrubs make their blobby dark brown body easy to pick out against the snow.

This project meant there would be no safe cover of water for the beavers since Hallam Lake was to be drained, and they would have no access to a winter food cache. We were faced with two options:

Considering the difficulty of trapping beavers, that the beaver family might be three to eight individuals, and the difficulty releasing beavers into suitable legal habitat, we went with plan 2.

Here is how it unfolded…

The project on the lake required us to completely divert the main spring water that feeds Hallam Lake into a small channel that runs adjacent to the lake near the bird of prey house. It flows alongside the trail before going under two bridges as it heads into the marsh to the north and east of the lake. Typically the beavers dam this channel and we actively under their work to keep it from flooding our forest trail! After work began in the lake and water was no longer flowing into it, we noticed that the side channel where we were diverting water was no longer being dammed by the beavers. They were letting it flow! Hmmmm. A week or so later we began to see an area of water between the wetland platform and the Roaring Fork River beginning to grow larger. Some of the previously dry ground was getting wet. Channels that had held water years and decades earlier were now submerged. We also began to notice a small pile of cut willows (beginning sof a cache) in a deeper and wider part of a channel. (See these points in detail on the map above).

The beavers from Hallam Lake had relocated!

Day after day we investigated and saw the cache grow larger. Initially, we thought this might be the beginnings of a lodge. However, the numerous narrow stems which are often around five feet long and under an inch in diameter meant this was the nutritious food the beavers were storing for winter. Another observation was that the beavers seemed to be building their cache near a large volume of fast moving fresh water. It made sense. The beavers are utilizing the relatively warm water (48 degrees) that typically feeds Hallam Lake to keep their food cache underwater and ice-free. This is how they have engineered their new home zone to ensure access to food as winter sets in.

A beaver bringing willows to the new food cache on November 23, 2021. Video by Jack Kravitz. (Video has been sped up).

Next, we were curious to find the lodge, which should also be in water deep enough and warm enough not to freeze. We found such a place behind the wetland platform in the area known as “beyond the white bench.” Here lies a spot where for thirty years kids in ACES programs have made forts and have felt like they are in the middle of the wild. We noticed holes under some of the roots were now stuffed with vegetation, and some piles of sticks grew taller around other holes in the ground. The water surrounding these trees also was higher. We realized that there were voids under these trees and that this is where the Hallam Lake beavers had taken up residence. The latticework of tree roots serves the same function as protective covering as sticks do on a typical dome-shaped beaver lodge. We found underwater entrances, saw how the channels connected, and observed how they were creating new beaver ponds and a maze of safe areas for travel.

Our attention now will be to make sure we do not undermine all the work they have put in when the project is complete and we refill Hallam lake early in 2022. The beavers now rely on the diverted water for their shelter, protection, and food. When they moved out of their lodge on Hallam Lake they had time to find new shelter and engineer a new home zone before winter. Cutting water to this new area in the middle of winter would be disastrous to them. Conversations are in progress as to how we manage the next step. The beavers have the highest priority!

The accumulation of organic matter and muck in the lake was beginning to choke the species it was supporting. Hallam Lake has been managed by people since the miners put in the first embankment by hand in the 1880s. Because of that, management is necessary to retain a rich fishery and biodiversity. The bright side is the rewilding and improved habitat that will result.

This project has been hard on a lot of us. But it was necessary as the lake’s embankment was failing and the control structures were no longer operable. Read more about our Hallam Lake Restoration project here.

I can not wait to observe life returning to Hallam Lake in the spring.

Hopefully, the beavers will reinhabit the lodge on Hallam Lake, where thousands of families, residents, and visitors will be able to see these remarkable creatures on some of the best beaver real estate anywhere. And, maybe some of their offspring will disperse and soon reside in the new area they crafted this fall. 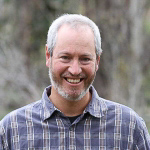