Has This Winter Felt Warm to You Too?

While many may shiver at the thought of spending the night outside during the winter season, the ACES Golden Eagle handles cold temperatures just fine. For ACES staff, however, it’s hard to imagine the Golden Eagle spending the night out in the cold, so we have heat lamp set up in case temperatures are forecasted to drop below 0° F. Having evolved in the Roaring Fork Valley, the Golden Eagle is well adapted to winter. Just as mammals grow extra thick fur as it gets colder, birds will grow additional down feathers prior to the onset of this harsh season. In this way, our local wildlife are well prepared for cold temperatures, and actually suffer when temperatures become too warm. Humans, on the other hand, evolved in Africa and will begin to shiver at 65° F.

Here at ACES, we recently realized that we have yet to turn on the eagle’s heat lamp this season, which led us to ask the question: “Has this winter been warmer than past winters?”

To find an answer, we looked at temperature data from the automated Snotel weather station on top of Independence Pass. Looking at the average daily temperature between November and January, we found that this winter has been warmer; a lot warmer. In fact, this has been the warmest winter since 1986 by a large margin. So far this season, the average temperature on Independence Pass has been about 4° C higher than past winters over the same time span. Even more disturbing, this year’s temperature data is yet another point on a worrying trend: our winters are getting warmer. 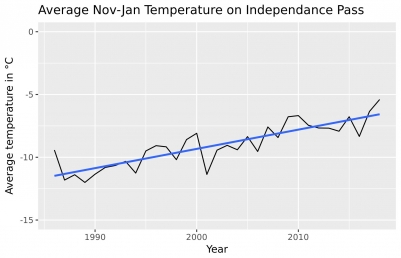 In 2017, snow at lower elevations around the Roaring Fork Valley melted out several weeks early: a clear sign of rising temperatures. Global warming will continue to impact our local climate and lead to increasingly noticeable changes.

But rather than high temperatures monopolizing headlines, it’s actually this year’s low snowpack that is gaining attention. Snow (or lack thereof) is far more noticeable than temperature, and a low snow year has more immediate impacts (poor skiing, water deficits, and summer fires) than an unusually warm winter. To compare the two, we took a look at this year’s snowpack to see how it stacks up against previous years. 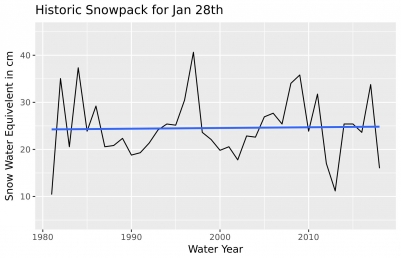 While 2018 snowpack is undeniably low, it is not record breaking (for now). Both 1981 and 2013 had less snow at this point in the winter, and both 2002 and 2012 were close, but marginally higher than this year’s snowpack. Overall, our current year does not appear to be part of a larger trend. Since 1981, the average midwinter snowpack on Independence Pass has not changed much.

Both of these trends fit the climate predictions for our region. Total annual precipitation is not expected to change drastically, while temperature is expected (with high certainty) to increase. The good news for everyone who depends on water from the Colorado River is this winter’s low snow is not part of a larger pattern. The bad news is that higher temperatures will have far reaching implications for water in Colorado, even if precipitation does not change. Higher temperatures will increase the amount of moisture that evaporates, which means that more of our water will be entering the atmosphere and moving away from us. Higher temperatures will also lead to increasing rain and decreasing snow, causing our snowpack to melt earlier.

For more information on our local climate and larger climate trends, check out the following resources: