This truly extraordinary outing began as we followed our ears toward bird activity in the cottonwoods and mountain shrublands along the Rio Grande Trail across from the RBR parking lot. As we observed chipping sparrows and the fleeting movements of warblers in the foliage, one member of our group spotted a very large bird flying from the cottonwoods to the oaks across a meadow. When we walked to a good vantage point, we found the owl and enjoyed viewing it through the scope. This was very likely the same owl that we had seen several weeks ago, using the same perch. Warblers, sparrows, catbirds and other songbirds entertained us as we watched the owl. At one point a red-tailed hawk screamed as it flew over our group and landed in a nearby treetop. Moments later, a Cooper’s hawk flew in and landed so close to the Red-tailed that we were able to get both birds in the same scope view. 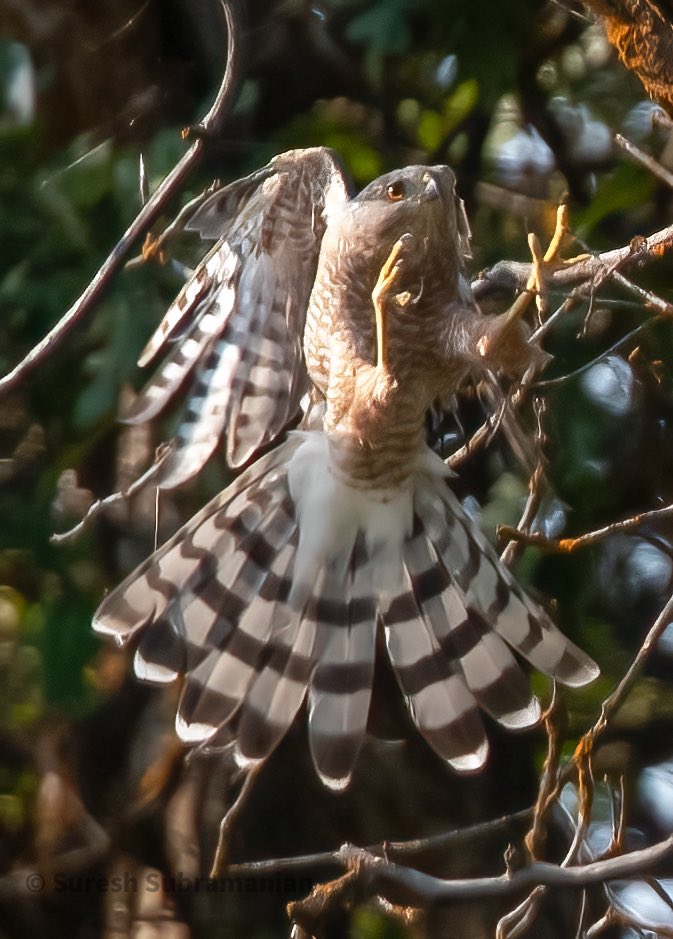 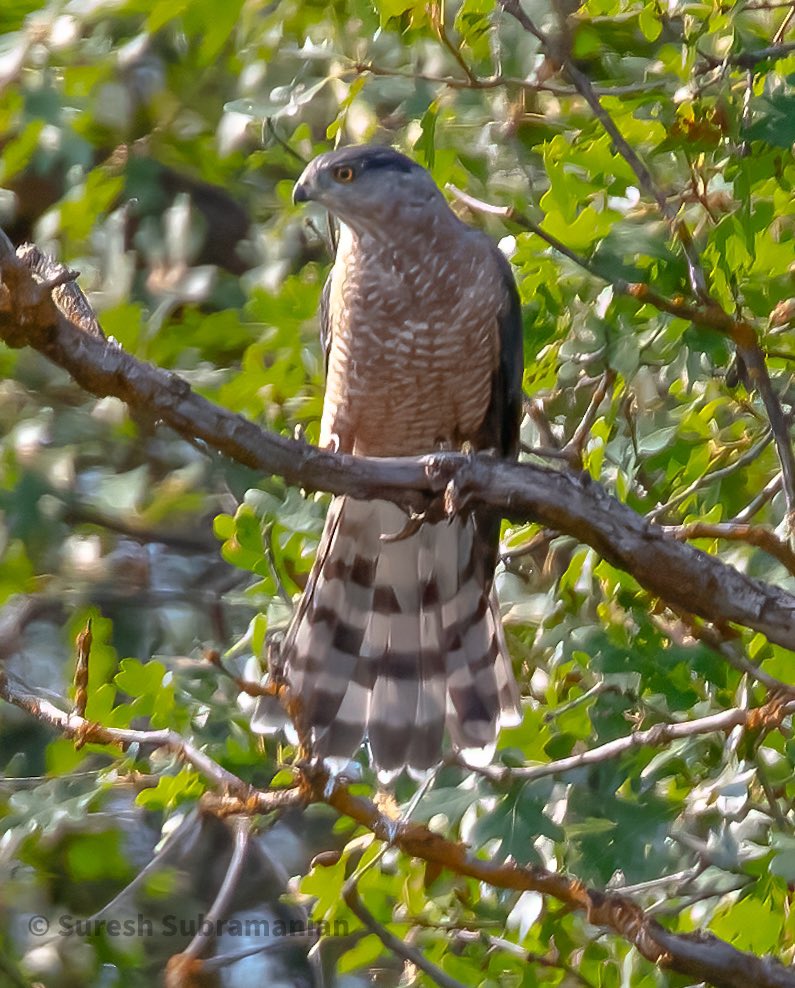 Meanwhile, a family of Lewis’s woodpeckers was active in the same trees and scrub-jays were spotted all around us. After a very satisfying time of soaking in the owl, we started to walk away from this location to bird on RBR property, but a second great horned owl flew in and we found ourselves walking the other direction to try to see it. As soon as we had it in our binoculars, about twenty crows began to gather to loudly mob the owl. Moments later, two Cooper’s hawks flew in to join the scene. What followed was an incredibly rich experience for our birding group, as we watched the hawks interact with the crows and the owl in a complex drama filled with the voices of the crows and hawks, and views of the alert owl as it turned to face the various birds that flew past it at very close range. 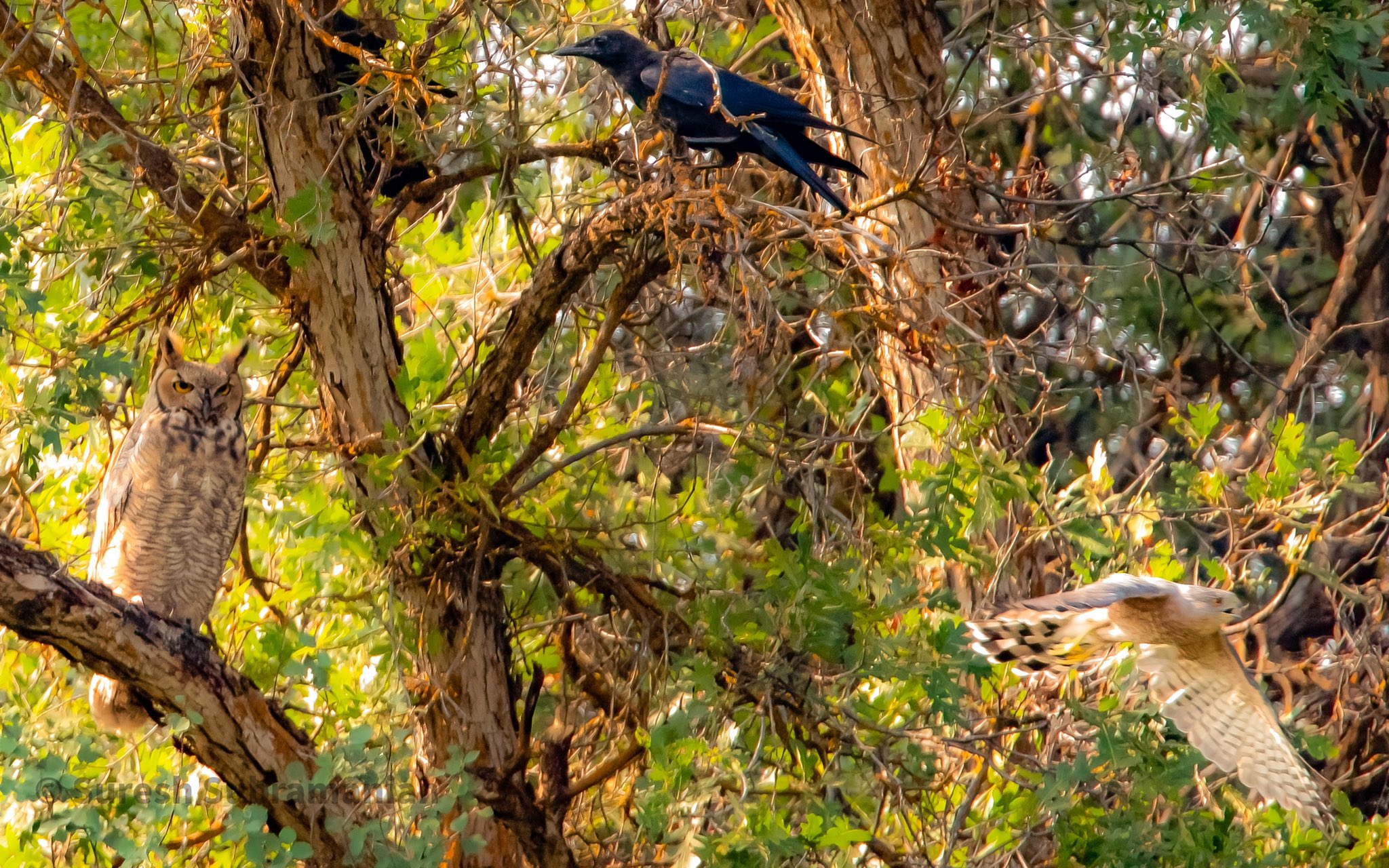 Luckily there were two photographers in our group who captured amazing photos of these birds and their behaviors. As we watched, the group conversation and questions touched on topics such as mobbing, apex predators, raptor adaptations, and so much more. We also took bets on who would give up first–the crows or the owl or the hawks… In the end, the crows’ commotion began to diminish while the owl didn’t budge and the hawks eventually flew off. We had spent more than two hours soaking in these incredible moments, and feeling a bit exhausted, we walked onward. Other highlights of the morning included great looks at MacGillivrays, Wilson’s, yellow, and black-throated gray warblers, as well as immature great blue herons and what seemed to be the last of the swallows as they migrate away. It was a fabulous morning, ending with a female black bear and her two wrestling cubs in the pasture as we walked back to our vehicles. Join us next Tuesday for Morning Birding at Hallam Lake! 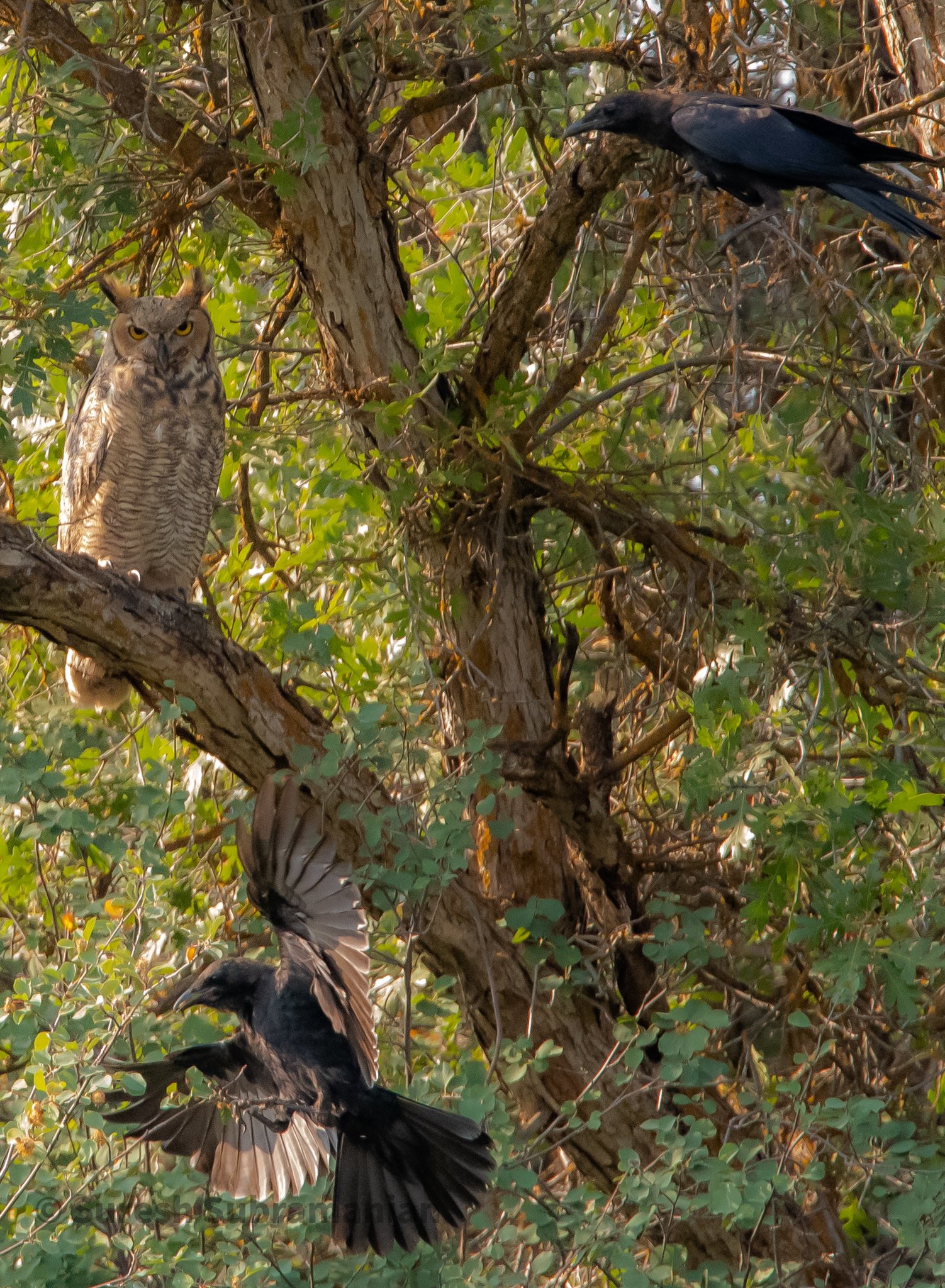