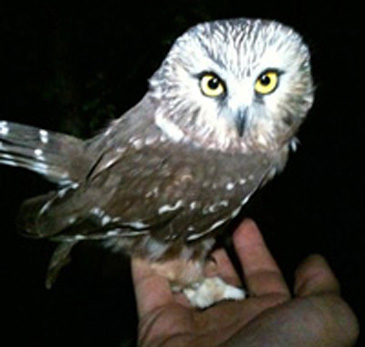 A couple of weeks ago I was able to experience a saw-whet owl banding project near Rifle, Colorado with Kim Potter, a wildlife technician with the US Forest Service and a licensed owl bander. Kim has been banding owls near Rifle for many years, and over a couple of nights throughout the fall Kim invites the public to come watch the banding.

When I arrived to the site, I noticed a small crowd gathered around a bonfire, with the red lights on their headlamps turned on. As I walked closer, I realized that Kim was holding a Northern Saw-whet Owl in her hand! She had caught this owl in a mist net by playing a recording of the species’ call to attract it. After carefully removing the owl from the net, she outfitted it with a unique aluminum band on its leg, which identifies the individual. Kim recorded information such as age, sex, weight, and wing and tail length. After gathering the information Kim then released the owl back into the night by perching it on a tree branch. That was the only owl that was caught that evening (Kim suspects that the full moon made it easy for the owls to see the mist nets), but I was able to help out on a net run, checking for caught owls, and take down the nets at the end of the night.

Northern Saw-whet Owls (Aegolius acadicus) are one of the smallest northern owls (about the size of one’s fist) and are found in the western portion of Colorado year-round. They are found in most woodland habitats, with densities highest in coniferous forests at moderate elevation. Much remains to be learned about saw-whet owl populations, distribution and movements, behavior, and breeding biology. Efforts such as Kim’s owl banding help us to learn more about this amazing Rocky Mountain bird.