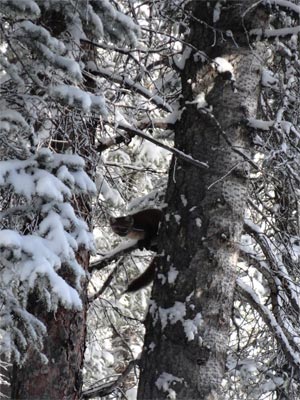 Winter is here in Aspen and our first big snow fell on January 7th. Of course I was out snowboarding on the mountain. Unfortunately a few wrong moves on my first run and I found myself in a tumble. To make a long story short, I fractured my arm. It was definitely a bummer… but this blog isn’t about me feeling bad about myself. Nature always seems to have a way of turning things around for me. Just a few days later I was waiting for guests to arrive so I could lead a snowshoe tour at Snowmass. The snow looked great and I felt a little bit down as I watched people skiing and snowboarding down the mountain.

No one showed up for my tour and even though my arm was a little sore I decided to hike the Rabbit Run trail anyway. As soon as I got out on the trail and into the woods I felt rejuvenated. The snow was beautiful, I saw tracks everywhere and that feeling of being alone out in a white forest made me forget about my arm and all of the things I couldn’t do. It really made me appreciate where I was.

I came to the end of the trail and sat down at the picnic table to take a few more minutes to enjoy some quiet before I entered back into the real world of skiers and snowboarders everywhere. As I sat there something caught my eye moving around in the trees. I clump of snow fell towards the ground, and there it was, the icing on the cake to my afternoon hike, a Pine Marten. It looked like a male to me, relatively large, the average male Pine Marten is 2-3 feet long. He slowly moved down a Spruce tree and I felt like we caught eyes. I nervously reached into by bag and pulled out my camera just in time to snap a picture of him looking right at me.

Sometimes Nature has a way of showing itself at just the right times. Hundreds of thousands of people come to Aspen and Snowmass every year in the winter to Ski and Snowboard these mountains and it’s no mystery why they are here. The snow and terrain is some of the best in the world. But, this place is special for many more reasons than just powdery snow. Take a walk on a trail after a fresh dusting of snow and you become whisked away into a different world. It’s hard to describe in words the beauty you will find. If you really pay attention, nature will reward you with something spectacular. If you’re lucky it’s a time when you need it the most.