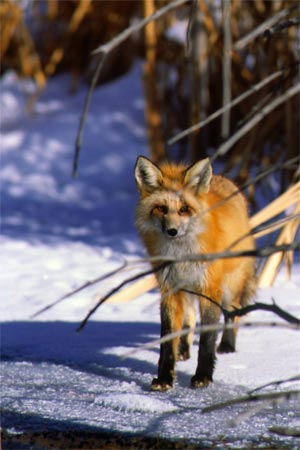 I have been told that a fox stands atop a roof along the morning commute. Fox on a roof: a strange image to conjure, like “swimming cat” or “skateboarding dog” – the juicy stuff of YouTube. The mind is tempted to fit everything into its “place”: foxes in the woods; people in the towns; white snow on the roofs. Break down those walls in our minds and the forest creeps in. The same idea that terrifies us also makes us curious, which may be why we watch these things on YouTube from the comfort of our own homes—perfect boxes and perfectly level desks with perfectly identical computer screens serving as our safe windows into the rugged animal kingdom. But what if, while we ogle at the video of a hungry lynx pouncing on a snowshoe hare, real animals were scurrying about on our rooftops, invisible to us? What if foxes hunted overhead, staining the snow red with squirrel blood?

If the thought of this makes you queasy, you aren’t alone. I would like to think that after a night of revelry and cheer, I could walk home to the comfort of my own bed without fearing bears (guilty confession: at night during bear season I will walk home singing bad songs off-pitch and very loudly…apologies to the neighbors). And yet I hear these stories of foxes on roofs and bears in trees often enough to know that we are surrounded by wild animals.

While walking home last week, I decided to veer right off Main Street onto a quieter side street to enjoy making tracks in a fresh layer of new snow. As I turned, I saw an animal trotting through an intersection, a bushy tail and fast gait giving away its identity: a fox! There is a certain glee in a glimpse. It tantalizes, beckons for more. I submitted.

Following a fox isn’t easy. Its pace was swift, and I had a block to go before I could look to the left up the street on which I had seen it pass. I hurried, only to be left in the middle of the quiet intersection hearing the buzz of a street lamp overhead. My trail had gone cold, it seemed.

The fresh snow was my saving grace. Under the lamp on the sidewalk, the fox’s tracks were unmistakable: two canine paws, as a dog’s would be, but closer together. I picked up the trail once again.

Its tracks were consistent and uniform. My boot tread paralleled the fox’s on the sidewalk, freezing our movements. Surely, I thought, the fox had abandoned the sidewalk and the lights, a move away from the straight lines of civilization and towards the natural contours of a snowdrift. I was becoming a predator for sight, hot on the trail of a glimpse. There would be no blood. The stakes, in a survival sense, were low. And yet I couldn’t shrug the “gotcha” moment where my intentions became clear, where my tracking artifice was recognized, where tracks became animal. It was as intoxicating as hunger itself.

And there, up at the end of the block, was the fox. It was illuminated by the next streetlamp, standing still, looking over its shoulder directly at me. I stopped. The fox was lean and lithe, its fur a beautiful bronze. It was standing in the middle of the intersection surrounded by a round pool of dull light, which gave the scene a vintage quality. The animal was born to trot, to seize opportunities with wary curiosity. Its nose and ears twitched. The fox exuded patience and control, as if I had not so much discovered it as it was allowing me a brief glimpse of something that happens daily. Just as I caught my breath, it broke eye contact and made for the shadows, leaving me to wonder at movement and purpose and light. My time was up.

Perhaps we are always within inches of wilderness. Most of the time we don’t know it; mountain lions are known to silently track people for miles, and I am sure I have slept unknowingly above scorpions. My walk to ACES is usually uneventful, thoughts of sleep, coffee, and ice keeping me busy. Meanwhile, a fox handily bests a pine squirrel on a rooftop somewhere, the evidence of which seen only by the magpies overhead.