This spring and early summer many of us have turned to the outdoors to cope with the impacts of the Coronavirus pandemic. Whether on trails, in parks, or just outside your front door it’s readily apparent that the spring and early summer were unusually hot and dry. Over the last year Pitkin County has gone from not being in a drought at all, to being in a moderate to severe drought. This is part of a continued trend caused by climate change.

In addition to the hot and dry weather many people have commented on increased winds. Unlike temperature or precipitation there hasn’t been a noticeable trend in wind as a consequence of climate change. Some recent research shows that globally wind speeds will increase as a consequence of climate change. Despite a global increase in wind speeds the actual local impacts are uncertain with some areas likely to get more windy and others less windy as the jet stream and other atmospheric phenomena shift. Looking at local data for the Roaring Fork Watershed we can see there is no strong trend in the data: 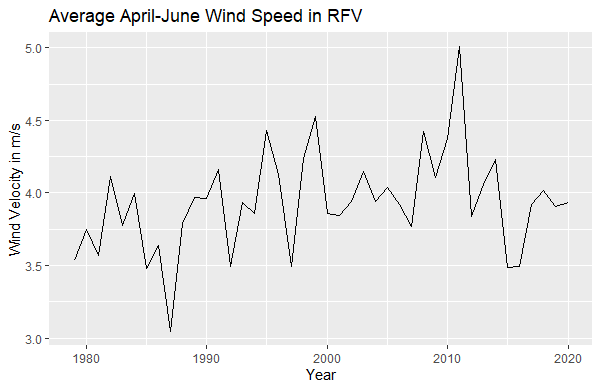 Looking at this graph it’s clear that while the past three months have been a little windier than normal they haven’t been exceptional. But when we drill down a little deeper we find that while April and May were pretty normal this June has been characterized by particularly high wind gusts!

To look at high winds we examined maximum wind speeds at the Aspen-Pitkin airport and at a Bureau of Land Management weather station on the Crown. Specifically we looked at the number of days in June where the maximum wind speed was in the 95th percentile. In other words these are the windiest 5% of June days. Over the course of a month we’d expect an average of 1.5 of these days. At the Crown there were 4 high wind days tied for the most in any June since the weather station was constructed in 1992. At the Aspen-Pitkin Airport there were 3 high wind days. Both sites had at least twice as many high wind days as we would expect! So if you’ve been thinking that we’ve had some particularly windy days recently you were right.