With this summer’s camps starting to wind down for the season, we wanted to offer some updates from our ACES Educators over the last month!

This crew had a magnificent week conducting a mini bioblitz of the farm and the wildlands around Rock Bottom Ranch. They all work together to survey the diversity of species that call this place home and help create an incredibly productive farm and ecosystem! We tried to uncover everything that crawls, slithers, flies, hops, or scurries around RBR. This group’s teamwork was proven time and time again as we identified over 50 different species of plants and animals! Throughout the week, we hiked up Buckhorn trail to see the outer, high desert region, and journeyed to the wetlands and explored all different types of ecosystem connections and adaptations. We also laughed, played, ran around, and fostered incredible friendships all the meanwhile. We also got to hang out with the bunnies and chickens, and collected and counted their eggs.

The piggie chipmunk, our incredible super creatures we created, and our week together will not soon be forgotten. Especially that evening spent at the ranch- where lightning put on a show for us and thunder blasts felt incredibly proximal! We even laid eyes on two great horned owls that night singing us a lullaby. This crew did a phenomenal job weathering the storm and whipped up an incredible dinner (where all got to share our gratitudes and tell stories), dessert, and breakfast all the meanwhile! Finally, we got to return to our forts for one more reunion and storm resistance test (even though one of them obviously did not pass the real storm test!). 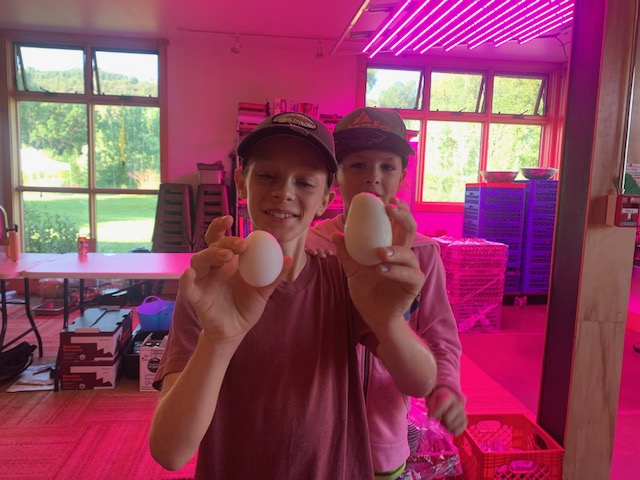 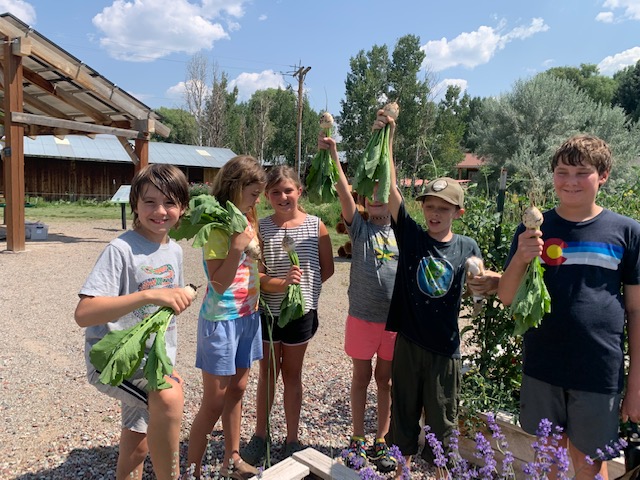 Very proud of their white radishes.

This week at Rock Bottom Ranch has been an amazing experience for all of us as we ventured out into our natural landscapes, looking for patterns in nature that may have otherwise gone unnoticed if not observed with “new eyes.” Nature is filled with patterns and in this camp we used nature as inspiration for many different art projects that include mandalas, weaving cords from cattails, exploring fractals and Fibonacci patterns in a variety of plants and in art, and we even thought about the behavioral patterns of animals like the bear and its cubs—such as, the bears’ repeated visits throughout the week around the chicken tractors and their interest in the chicken feed! Seeing the bear is always a special moment for the groups because it gives us the opportunity to talk about our relationships with other animals, understanding that we share this space not just with the ranch animals but also the wildlife. That means respecting it as it continues its way of life.

Apart from the art projects, we also spent time helping around the ranch. We got to collect chicken eggs, feed the bunnies, and help in the children’s garden where everyone got to eat some ripe strawberries and peas. We played games like Camouflage which opened the conversation to how animals have patterns on their own bodies, which serves as a very helpful adaptation and beautiful spectacle for some animals.

This group of kids have been observant and creative the whole way through. It was easily one of my favorite camps this summer because of all the wonderful art that we created. Thanks for having them come out to Rock Bottom Ranch! Hope to see some of them next summer. 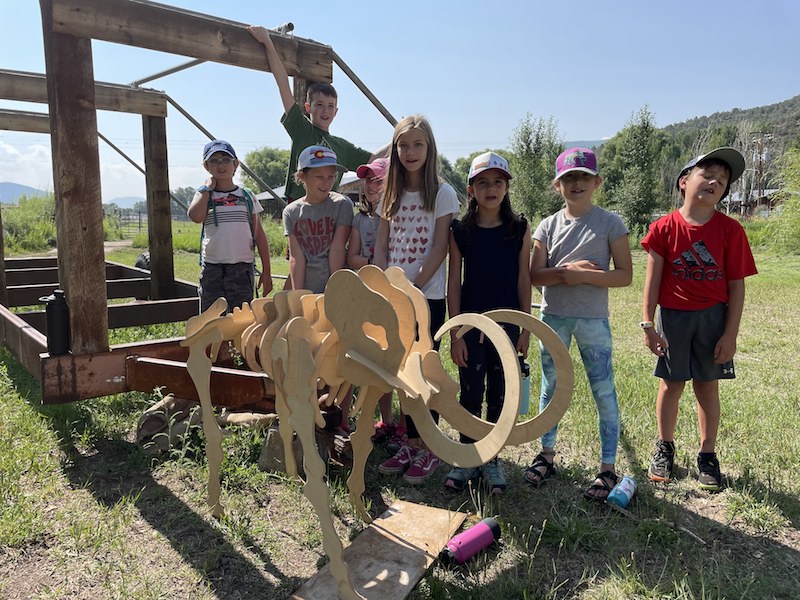 Working with their model fossils to build a mammoth. 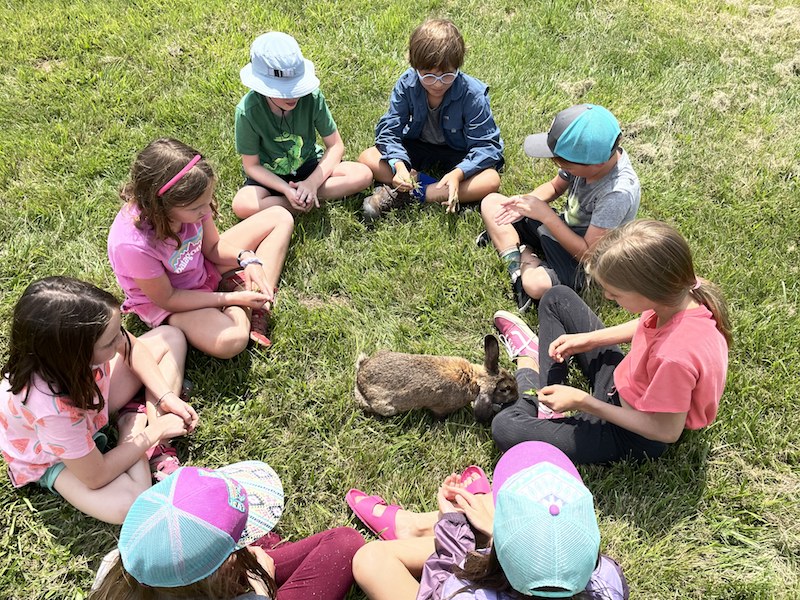 Campers sit in a circle around one of the grazing ranch bunnies.

This week at ACES Gnome Adventures camp, the Brave Adventurers were asked by the Goddess Faira of Hallamheld to complete a series of quests to save the realm from the growing Darkness and return the magical creatures to Hallamheld from their banishment to Netherland. In order to complete the quest, we were left with a shard of a map of Hallamheld and each day we had to locate a new shard that would lead us to the places we needed to go that day to complete our quest. On Monday we received a quest to save the Garden Gnomes in Gnome Forest by rebuilding their village that had been destroyed by the darkness. They thanked us for our hard work by inviting us to help out around the ranch. We collected eggs and fed the bunnies until it was time to retire to the shade for an excellent Fairytale from Pakistan about a magic garden. On Tuesday we received word from Faira that we were needed for a second quest to help the Woodland Fairies by checking on all of the woodland animals they are in charge of caring for. These brave adventurers went above and beyond by creating new homes for each of the creatures of the forest so that they would be safe until the fairies returned. Several of the animals even decided they’d stick with us to keep us company until the fairies returned! As a token of their gratitude, the Fairies supplied us with materials to create our very own fairy wings, which turned out beautifully!

On Wednesday, Faira sent us on a quest to save the Water Nymphs by checking out the water quality at their favorite swimming hole. We set out on a long hike to their swimming hole and when we arrived, we searched high and low for signs of healthy life and found a huge diversity of creatures living in the water. The Water Nymphs thanked us for our scientific inquiry skills by gifting us materials to create our own snail companions (one of the Water Nymph’s favorite pets!) On Thursday, Ali was called away for a quest to a distant land and left our group of brave adventurers under the wise wings of Mira for the remainder of the week. They received a quest this time to help bring back the dragon’s fire by embarking on a scavenger hunt around the wetlands to find all of the necessary ingredients to perform the spell that would bring the Dragon’s fire back to life. The Mountain Dragons thanked us for our determination by giving us materials to make our very own dragon masks! By saving all four of the magical creatures, they are set to return to Hallamheld tonight! However, little do they know, the darkness has yet to be fully vanquished. On Friday, they found that not everything is as it seems and had one final quest to finally save the Hallamheld from the Darkness forever!

This group is full of amazing, supportive, creative and imaginative adventurers and it has been such a pleasure to lead them through these exciting adventures this week. They are always looking out for each other and making sure we all have a successful week of magical experiences. I’ve had such a blast playing and exploring with them this week! 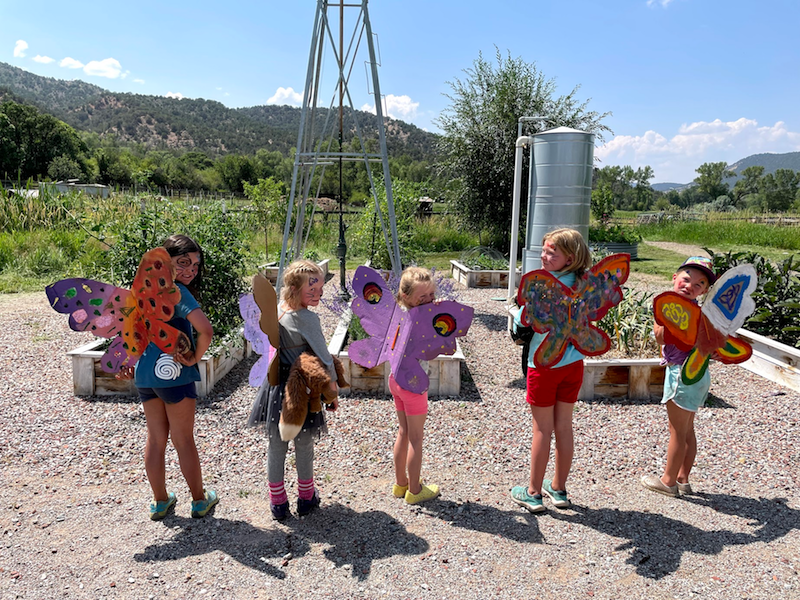 Just some cuties showing off their handmade fairy wings!

This week we focused on Fungus, Bacteria and Invertebrates (F.B.I.) and learned about these topics through different activities and group games!

On day one we got to know one another and explored the nature preserve after introducing our favorite decomposers, the F.B.I.! We played games, found our home base and ended the day by playing in the garden and pond dipping on the side porch. Day two we learned and sang songs about the Fungus, Bacteria and Invertebrates that work so hard to break down the organic material around us, with a focus on our wiggly worm friends. We dug for worms in the garden, read one of my favorite books, Diary of a Worm, talked about decomposing and the role that worms play, and made worm artwork on paper plates. On day three we took a trip off of the preserve to the Roaring Fork River and talked about the importance of water to the F.B.I. and decomposing. The question we pondered and tried to answer while at the water was, “Does the river support life?” Our answer… yes! Many invertebrates and bacteria of all shapes and sizes. Thursday we focused on our fungus friends and found all kinds on the preserve. We learned about the importance of water in the growth of mushrooms, the different parts that make up the fruiting body and went on a mushroom hunt to discover the different species that grow on the preserve! On Friday, we wrapped up the week with all of the campers favorites. More water fun looking for insects and invertebrates at the beach and the side pond. Catching and identifying insects in the tall grass of the donkey pasture and playing everyone’s favorite game…robin’s and worms!

It has been so wonderful leading this group of inquisitive, creative and outgoing campers this week. We all have learned a lot together and I’m looking forward to ending tomorrow on a high note! 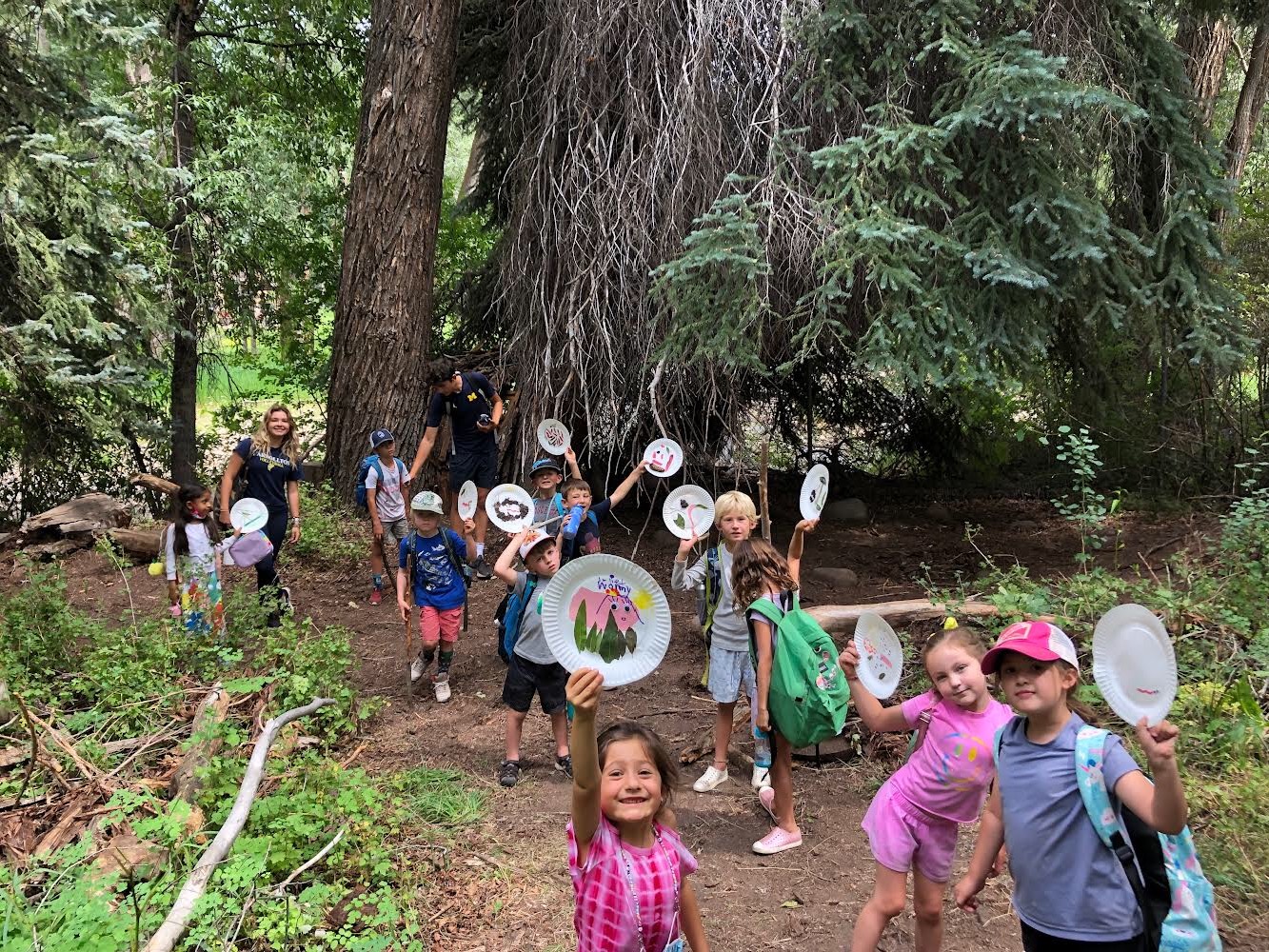 Paper plate worms made with construction paper and natural materials! 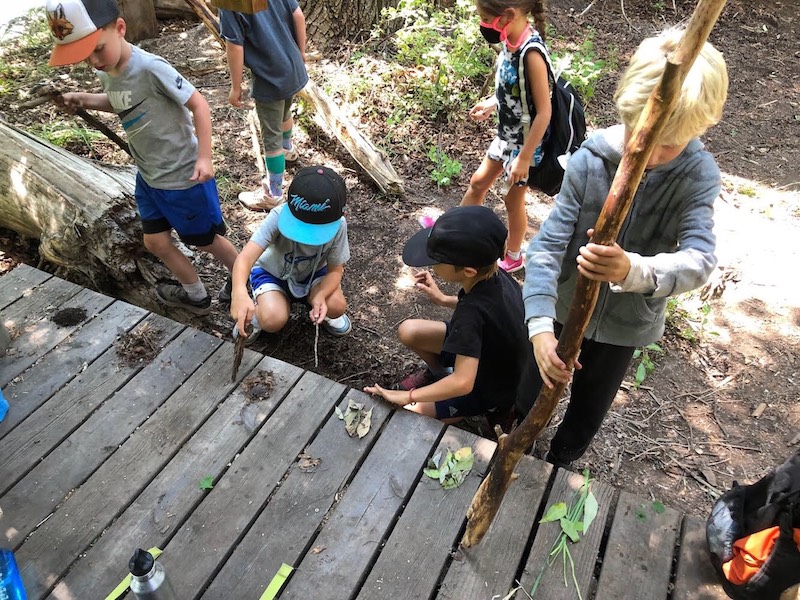 Making different piles for the stages of decomposition.

This week’s theme was simple machines. On Monday, we explored levers and their functions by competing in a three-task competition (catapults, seesaws, and baseball bats), and then on Tuesday we explored wheels. We made water wheels out of paper plates, cups, straws, etc. and tested them in the Roaring Fork. Students came up with their own designs and half of them worked! On Wednesday we went to a nearby playground and looked at simple machines in action. We also began asking questions about how stuff works and talking about some basic physics concepts as we explored the playground. One question we came up with was do adults or children go down slides faster. To figure this out, campers designed their own science experiments on Thursday using inclines and tubes/spheres. Adults do in fact go down slides faster, which is what our data suggested. We also talked about how complicated answers like this are (Friction! Force! Mass! So many variables!).

Of course, we’ve also had some camp classics this week, like playing camouflage, building forts, and learning about ACES’s resident reptiles. We also played some large group games with another group and that was a big hit. 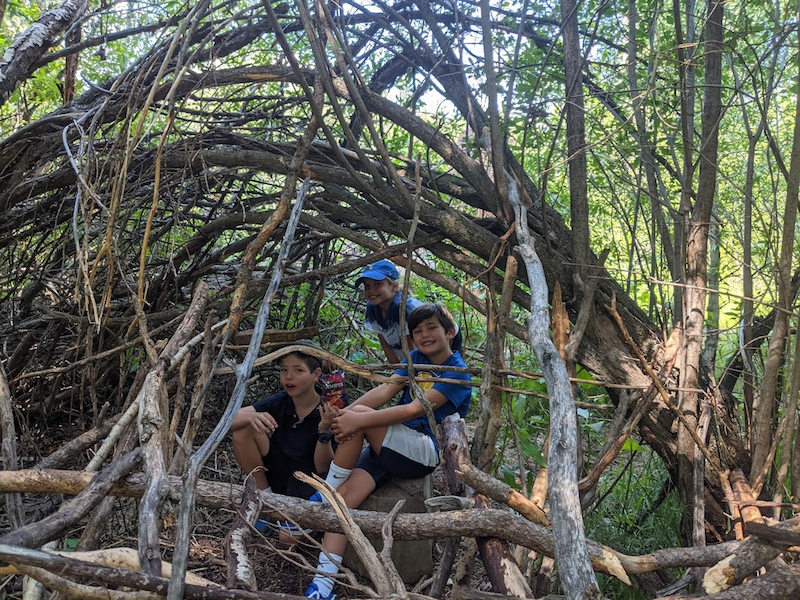 Hanging out in a Hallam Lake wood fort! 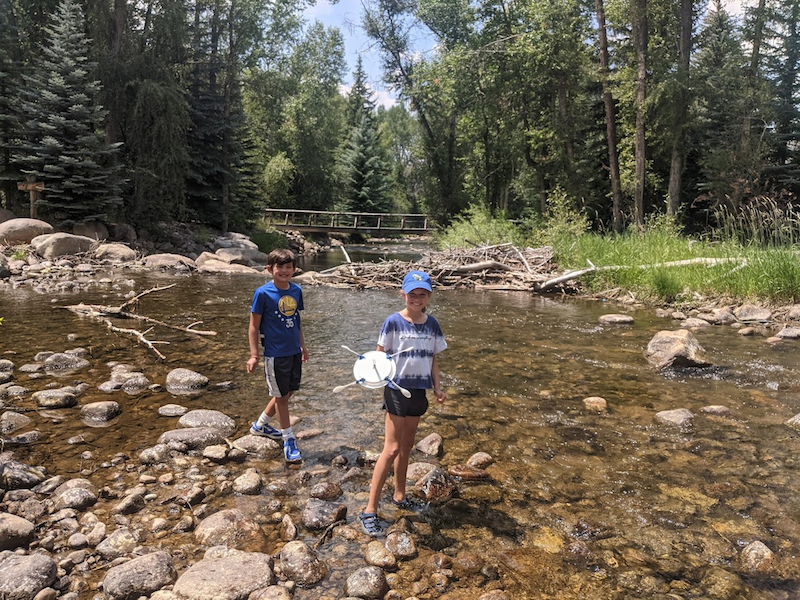 Showing off some “Simple Machines” in the Roaring Fork.

We started our week on Monday by exploring Hallam Lake, building an awesome fort in a secret spot, and learning about how levers work. On Tuesday, we learned about pulleys and mechanical advantage. We used a pulley system to dump a bucket of water on our heads! On Wednesday, we learned about catapults, which is a combination of simple machines. We built our own catapults, and tested them out on the preserve. Yesterday, we built a Rube Goldberg Machine, which is a chain reaction machine. We also got to witness a reptile presentation in the nature center. Today, we got the very special opportunity to visit the Aspen Fire Department and see how they use simple machines in their work! (Special thanks to Mike Lyons for the tour!)

Your children are awesome learners. They were very good about building, playing together, and exploring how simple machines work. I was very happy to be a part of the group, and it was really fun for me to learn and explore alongside your kids! 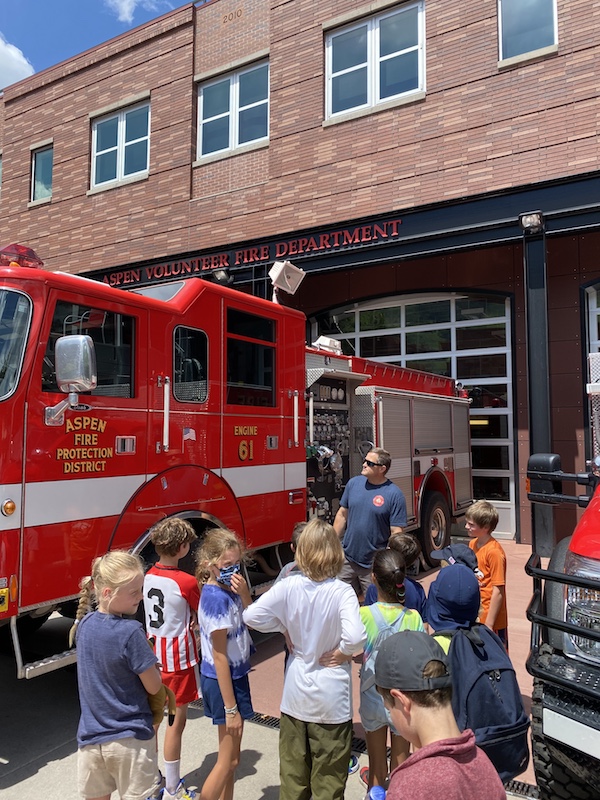 Our trip to the Aspen Fire Department to see how they use simple machines. 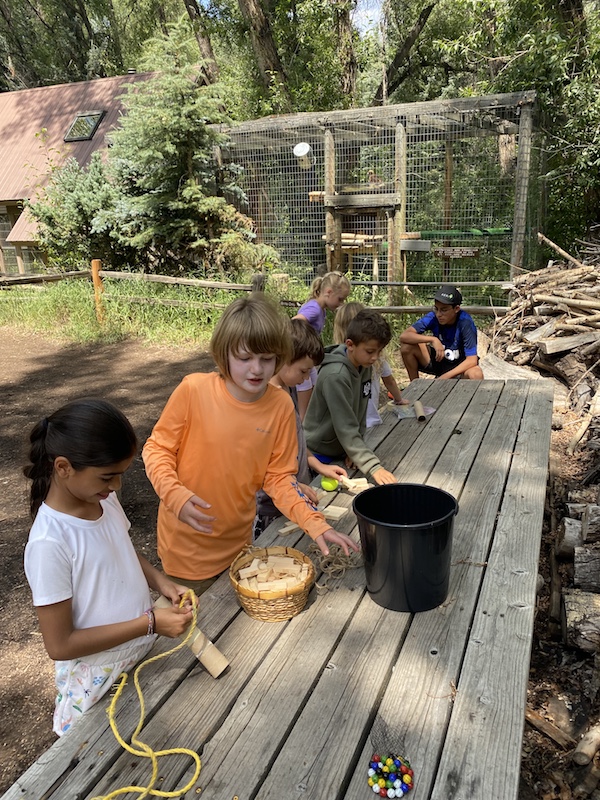 It’s been a fantastic summer at ACES and we are so grateful to have been able to support such incredible programing over the last two months. Cheers to the new school year and the last week of campers at Hallam Lake!