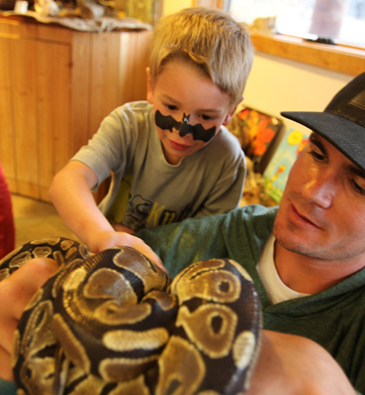 Happy Halloween from Aspen Center for Environmental Studies! On the evening of Monday, October 22nd, ACES hosted ‘Creepy Crawly Night’ for all Aspen Elementary School second grade students and their families. The Hallam Lake Nature Center was decked out in spooky decorations, spider webs, and information and crafts involving our favorite creepy crawly Aspen animals, like spiders and bats. Some of our resident indoor animals made a special appearance, such as the ball python, the Eastern box turtle, and the Western tiger salamander. Many ‘creepy’ animals ended up painted on second grader cheeks and across their noses!

Aspen Elementary School second graders have been studying animal adaptations in environmental education since the beginning of September. They have learned about the four different types of camouflage, and even created their own “Creature Features”, animals decked out in any 3 adaptations that the students can imagine – as long as they somehow help that creature to survive. This event gives them the chance to bring their families to ACES and demonstrate their knowledge on why animals have certain physical and behavioral adaptations: wings to fly, spots to camouflage, or a shell to hide. Fun was had by all, and it was such a treat to see the second graders and their whole families at Hallam Lake!